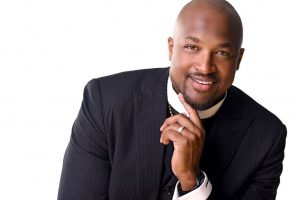 Rev. Dr. Robert Richard Allen Turner is a millennial who is passionate about his calling to serve this “present age” by speaking truth to power, and by following the Word as printed in Isaiah 61 to “preach good tidings to the poor…heal the brokenhearted…proclaim liberty to the captives, and the opening of the prison to those who are bound.” Currently, Dr. Turner is the pastor of Historic Vernon A.M.E. Church, in Tulsa, Oklahoma, which has the only edifice which survived the 1921 Race Massacre on Greenwood. Additionally, Dr. Turner is now the Academic Dean for Jackson Theological Seminary, in Little Rock Arkansas. He sits on the National African American Reparations Commission, Board of Trustees for the American Village, the 1921 Race Massacre Centennial Commission, Tulsa Mass Graves Oversight Commission,  President of the Historic Greenwood Main Street District, the Board of Directors for the Grit for Democracy, Terence Crutcher Foundation, North Tulsa Task Force, Demanding a Just Tulsa, and the Advisory Board of the Blackburn Institute of the University of Alabama and the chairperson of the board for the Turner Ministry Association 501(c)3.

Dr. Turner  has been featured on CBS’s 60 Minutes and Evening News, ABC, BBC, MSNBC (Chuck Todd, and Andrea Mitchell’s show) CNN, Good Morning America3 (twice), NPR Here and Now (twice) and the Euronews, Washington Post (as an op-ed writer and interviewee), LA Times, and New York Times, along with Politico, and several other national and international publications and news outlets.

Rev. Turner graduated with honors from the Interdenominational Theological Center’s Turner Seminary in Atlanta, GA, with a Masters in Divinity. He later received his Doctor of Ministry from United Theological Seminary in Dayton, Ohio. In his dissertation, Rev. Turner coined the phrase, “Prophetic Civic Engagement,” and highlighted Dr. Martin Luther King, Jr. as a shining example of this concept. He is a 1999 graduate of Alabama Boys State, a 2013 graduate of Leadership Mobile, an ordained clergyman, and a lifetime member of Kappa Alpha Psi Fraternity, Inc.

In 2005 after struggling over his calling, Rev. Turner withdrew from law school and went on a mission trip to Kenya and was given the title co-team leader. In Kenya, Robert grew extremely close to God. While there he supervised approximately 25 young adults together they by the power of God, taught, preached, and healed, many people. From the Kenyans Turner grasped a greater appreciation for living by faith alone. Furthermore, by the mercy of God, he and his teammates were used to bring well over 200 souls to Christ. Constantly seeking to help the needy. After Hurricane Katrina, Pastor Turner also went down to New Orleans to evangelize, comfort those grieving, and to offer assistance where needed. Most recently, he took a mission trip to Egypt where he visited holy sites, and learned from monks key insights on spiritual discipline.

Formerly the pastor of St. Paul A.M.E. Church in Mobile for three years, he is a former board member of the Mobile Chapter of the Sickle Cell Disease of America and the Interdenominational Ministerial Alliance, assisted organizations create mentorship programs and recruit mentors. Dr. Turner was also a UniServ Director for the Alabama Education Association where he represented over 1,800 members covering 4 counties, and 51 work sites.  Before moving  from Mobile, Rev. Turner was a regular columnist for the Press-Register and AL.com. Previously he has interned for U.S. Senator Richard Shelby, former Congressman Artur Davis, Alabama Supreme Court Justice Harold See, and Secretary of State Jim Bennett.

Additionally, Dr. Turner has done research for the Kettering Foundation and the David Mathews Center for Civic Life. While at the Mathews Center for Civic Life, he co-authored the 2015 Alabama Civic Health index. Dr. Turner loves to preach and was an adjunct professor of Homiletics for Jarvis Christian College. His passion for social justice led him to become the Chair for the Social Civil and Political Action for the A.M.E. Church in the state of Alabama.  He continued his fight against racism in his previous position as Project Director for Truth Racial Healing and Transformation for Selma, Alabama where he oversaw a $3 million grant from the Kellogg Foundation for the BlackBelt Community Foundation with the goal of jettisoning the belief of a hierarchy of human value based on physical characteristics such as skin color.

Currently, Dr. Turner is fighting in Tulsa for justice for the victims of the 1921 Race Massacre, getting burial sites excavated, and seeking reparations. Each Wednesday you can find him with his Bible and Bullhorn seeking by God’s direction, to call the city to recognize what they did in 1921, repentance, and reparations.

As of August 25, 2017, Rev. Dr. Robert R.A. Turner became the pastor of the Vernon Chapel in Tulsa, Oklahoma. Since becoming the pastor, he has been a tireless advocate for the Historic Greenwood District (the site of former Black Wall Street), highlighting the church’s history from its beginning in 1905 to today, given countless tours of the church,  increased membership, installing tv monitors, the church has been placed on the National Historic Registry, creation of a website, started several ministries, and outreach programs, children’s church, an evening service, a satellite campus, homeless ministry, feeding ministry, and a $5 million capital campaign to restore the basement, stained glass windows and prayer wall for racial healing. So far they have raised over a million dollars for capital improvements. Additionally during COVID19 God led Dr. Turner to start a feeding  program. Historic Vernon AME Church being one of the only places in the Tulsa serving meals on a daily basis since March 18, 2020.  As of February 3, 2021 we have distributed over 275,000 meals.

Turner has been married for over 15 years Shere Turner. They have two boys, ages 10, and 8, Robert Richard Allen Turner II (Deuce) and Malcolm Robert Martin Turner (Bobby). Together they found the Turners Unlimited, LLC. and the Turner Ministry Association 501(c)3.

In his free time, this community activist, consultant, dean, and clergyman enjoys reading, sports, mentoring youth, working with convicted felons and spending time with his family.

Dr. Turner travels the country as a guest lecturer, life coach, DEI trainer, presenter, facilitator and motivational speaker. Since coming to Tulsa he has received several awards such as the Hometown Hero from the Modern Woodmen, Nat Turner Award for divine leadership on restorative justice from the African Ancestral Society, Trailblazer Award from North Tulsa Educational Task Force, Terence Crutcher Foundation Award for commitment to criminal justice reform , lastly he was given the distinction of being named Tulsan of the Year  for 2019 by the Tulsa World the cities largest news publication. His areas of focus are racism, community development, grassroots organizing, non-profit grant program management, faith-based community involvement, civic engagement, mentorship, deliberative forums, and employee relations. If you would ever like him to come visit your area you can book him at robertturnerministries.net

Thank you for visiting! May God richly bless you and yours